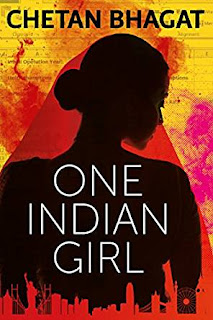 I always eagerly wait for Chetan Bhagat's books. No, I am no ardent fan of his write-ups or him. But, I always anticipate his book to be a super duper hit like 2 States. Yes, It all started with 2 States. 2 States is the hands down the best write-ups of Mr. Bhagat. Do you agree? Comment down below!

Enough of the past. Here I am to review one of his much awaited books, One Indian Girl. I am not going to give everything up about the story in the name of review. Here, i will just hit the main points and my views about the book.

By the name itself, we could guess that the story is about a girl (obviously). It tells you about challenges a girl could face especially in her relationship, work place and even at her own house. The book talks about how a girl is being judged because she earns more than a man and also just because she is a girl. This would be the first time where Mr. Bhagat has written the book from a female's perspective.

One Indian girl revolves around this girl, Radhika Mehta, who is from a Punjabi family (of course) and earns a loads of money (million dollars baby!). She believes in gender equality. Too vague? All right, she is a feminist. Better?

Mr. Bhagat has managed to hit the bull's eye perfectly talking about feminism and general things happening around our society.

The story swings between the Present and the Past. As our actress (this story will be a bollywood movie some day, for sure!) travels from Delhi to New York to Hong Kong to London to Goa, we travel along with her. So also with her relationships.

Everything in just few bullet points:

No, that's not it. A Bollywood movie  never ends like this. At her wedding, both her ex'es come down to Goa to apologise and were ready to marry her. What decision will Radhika take? That is what the climax is about.

You must have guessed it already! I personally think, this is nothing less than a masala Bollywood film, which can easily hit the Box Office. There are various tit-bits of twists and turns in this book which shows the feminist side of it and also various things which will let you have the reality check.

The story line is definitely different from other books by Mr. Bhagat. I definitely recommend this book to you. Read up for more.