TILL DEATH DO US PART!

My friend Akshaya was getting married. The marriage took place in Hyderabad. I am her only friend, so I had to reach Hyderabad 1 week before the marriage to give her company.

I landed at the airport at around 10 pm. My flight was delayed by more than 5 hours because of some technical problems. I was so tired and stressed out, sitting at the airport for hours. I breathed a sigh of relief as I got my bags and rushed outside to get into a cab and go home.

When I came outside, there were no cabs available. I was waiting for a long time, but in vain. It was already 11.00 pm. I was scared to go in an auto as it was too late and I thought it won't be safe for me.

My mobile battery was also down and I couldn't call my friend to tell her about my whereabouts. I was waiting patiently. I heard an announcement saying a flight had arrived from Chennai. I had a small hope that I would get a cab when the next flight arrives.

After few minutes, I saw many people coming outside. I was happy thinking that I would go home soon. But, no, many people had their relatives waiting  to pick them up from the Airport. There were no signs of any cabs.

I was really frustrated. I noticed a guy standing alone with the earphones plugged into his ears. He looked decent. I was getting late and I wanted to ask him if he could give me a company to my friend's house in an Auto.


Me: Hey! (He couldn't hear me as he had earphones plugged. So, I went and touched him to get his attention.)
Me: Hey! I'm sorry to disturb you, but can you please give me company to my friend's house? It's already very late and I'm a little scared to go alone in auto. I'm new to this place. Can you help me, please?
Him: Not a problem. I will drop you safely. Even I was getting late. Where do you want to go?
Me: Umm, I want to go to Janchaitanya colony, house no: 42. Is it close to the place you want to go?
Him: Yea, I will tell him to drop you first. Don't worry. (He smiled)
Me: Thank you so much! :)

We got into the auto and headed to our destination.

I reached my place. I gave him Rs.100 as my share for the auto fare. He refused to take it. I thanked him and went inside her house.

Akshaya and me are childhood friends. She moved to Hyderabad when her dad got transfer. But, we were in touch. Her family is really sweet. They consider me as their own daughter.

I was really happy to meet Akshaya after almost 2 years. She was getting married and I was so excited. It was already late and we went to bed.

Few days had already passed. We were having a blast. Akshaya was enjoying her last days of bachelorette.


The day came. She was not single anymore. I was so happy for Akshaya that she found her love. We were clicking photos and having a blast.


Suddenly I noticed someone very familiar to me. It was him. They guy who helped me out. He saw me and rushed towards me.

Him: Hey, how come you are here?
Me: The bride is my friend. I came to attend her marriage. You tell me. What are you doing here?
Him: The guy is my friend. Haha, I never in my life thought I would see you here!
Me: Yeah, same here! :) :) Btw, what's your name? I forgot to ask you that day!


It was really good talking and knowing more about him. We exchanged our numbers. We shared the incident with Akshaya and her husband. It was really a special day.


I don't know whether it was love at first sight or just a crush. That whole day I was with him and I was feeling really special. He was different. Her marriage got over and I was back to Mumbai. I seriously missed him. It was really nice being with him.


Months had passed. We became very close friends. More than friends, maybe. We were in touch through emails, texts and Skype. We could always make each other laugh.

By now, I was sure that it was not just crush. It was love. I loved him.  I didn't know how he felt about me. I didn't have the guts to express my love. The distance did not matter to me at all. I just wanted to be with him.

I tried to convey my love for him indirectly many times. I don't know whether he did not understand it or he didn't want to understand. But, I was sure he knew that I loved him.

I had to go to Chennai for a meeting from my office. I was so excited. I wanted to meet him. My tickets were already ready. My flight was at 7.30 pm. I messaged Jai very happily. 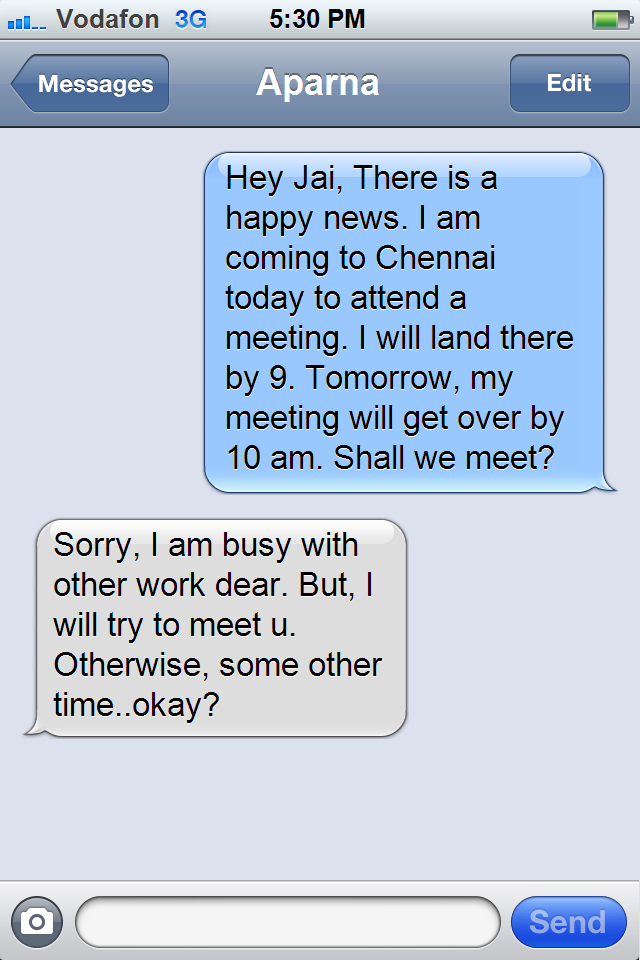 I was sad reading his message. I seriously thought he was not interested in me and I was just assuming things. I did not reply anything to him.

It was time for me to board the flight. I wanted to tell him that I love him and wanted to meet him. But, something was stopping me from messaging him. What if he rejects me?

I landed at the Chennai Airport. Took my bags. I was totally lost in my own world. I went outside the gate and was waiting for my office car. I called the driver and he said he was stuck in the traffic. I was already irritated and this made me mad!

Suddenly, my phone beeped. It was Jai's message. 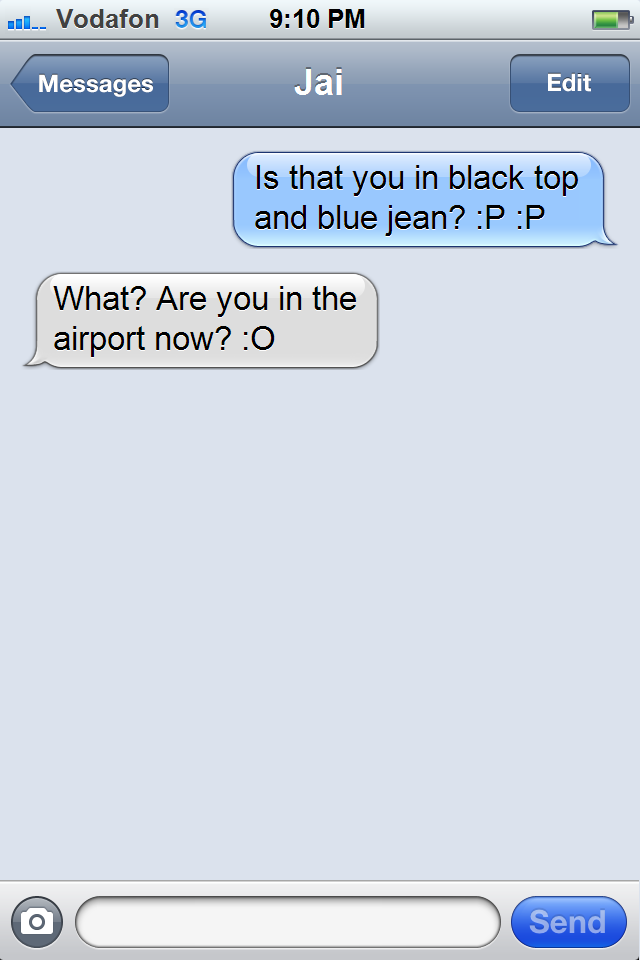 He did not reply anything. I was searching frantically everywhere in the airport. I tried to call him, but he was not responding.

Suddenly I noticed a smiling face looking at me. It was him. I saw him.  He had come to see me. I was the happiest person in the world. He was holding his DSLR. He clicked my photo. I ran towards him. I wanted to hug him, but I was hesitant. I didn't know how he will take it. I stood there looking at him.

He pulled me gently towards him and hugged me tightly. I never expected this. He was holding me tight. We hugged and I laughed and cried with relief and disbelief and every other feeling I think I've ever felt in my life.

As we untangled, I couldn't meet his eyes. I don't know why! I wanted to be in his arms forever. I love him so much! 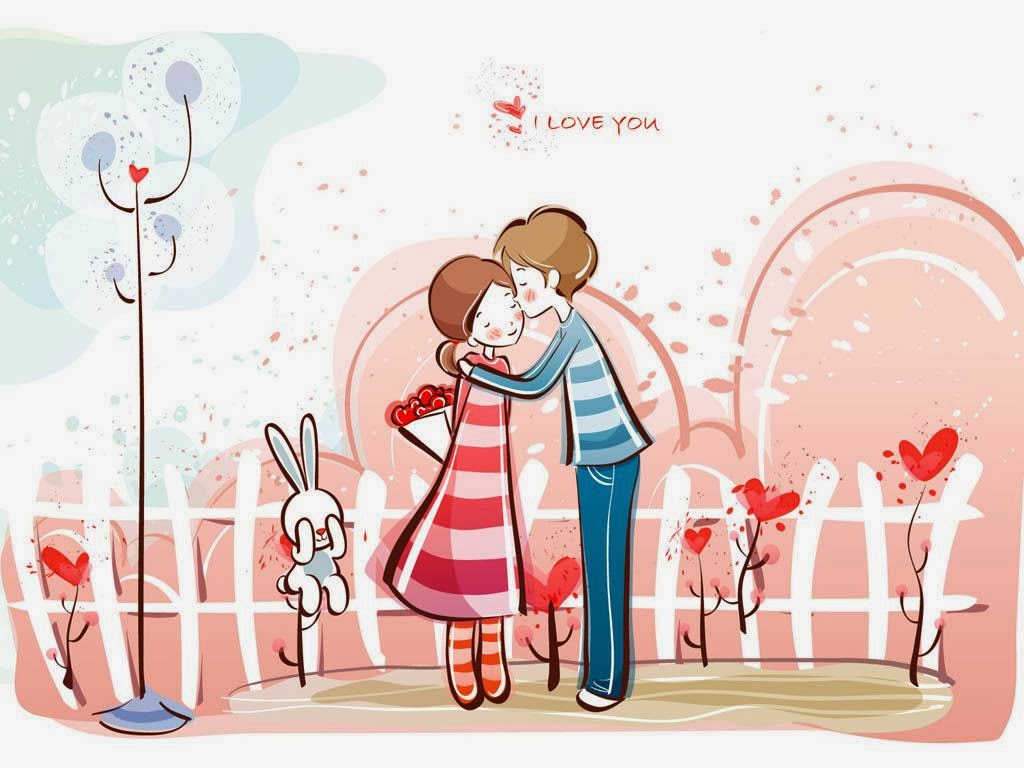 "Why did you take my photo?'' I asked him, confused. "I wanted to capture this moment!" He said and kissed me on my forehead. :)

We had our dinner together and he dropped me in my office guest house. I didn't want to leave him. We were holding hands while walking. An awesome day, it was.  A voice spoke calmly and clearly, right inside my head -- " He is the love of my life"

My meeting was over. It was time to get my flight back to Mumbai. He dropped me at the airport. It was really an awkward moment. I didn't want to leave him. We were sad. We did so many things, trying to make the most out of our time together. But honestly, it would have been alright if we had done absolutely nothing.


We are more than 1000 km apart! But, Distance means so little when someone means so much. I know we would be together, forever.
That day, the platinum day of love, we call it. Platinum because It is a reflection of love! Platinum as a precious metal is like our love which is eternal and does not tarnish. Because real love can only begin. Never end. 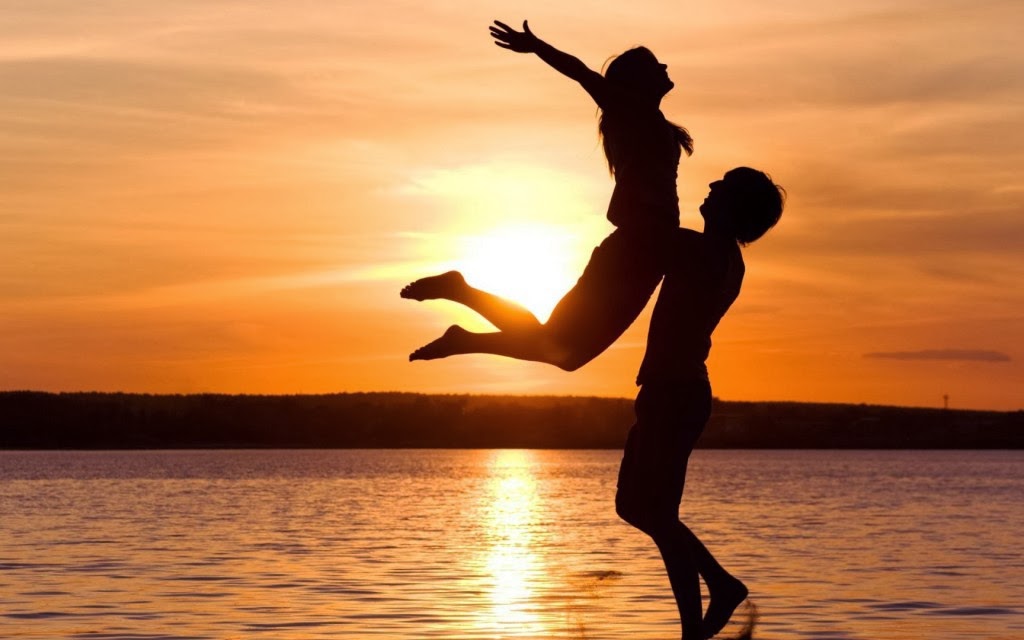 This post is written as a part of Platinum Day of Love Contest hosted by IndiBlogger.
Posted by Hey Wait, Listen! at 9:52:00 AM